I walked from Chofu to Haneda

The first rehashing article of a huge walk

Hello, this is TrpFrog (@TrpFrog). I'm leaving the task alone.

The other day, a group of 3 stupid 2nd graders (UEC19) and 6 energetic stupid 1st graders (UEC20) went from the UEC Tama River Ground in Chofu to Haneda Airport ON FOOT. Why?????

So I came by the last train. I'm going to blow!

I decided to meet at 4:00 to harass the people at my parents' house, and also to make the Chofu people get up in arms (really?).

I enjoyed reading books and wandering around the station. Why am I WALKING AROUND before the WALKING party?

I'll be free for a while, so I'll read Adachi and Shimamura

It's cold, I want to walk

I met up with nerds of UEC19 and ate rice at Matsuya. It was delicious. I'm going home and going to bed today.

As if to break the mood, the person in front of me finished the spicy food and had the nerd take a photo of the announcement of the foolish event.

Kimchi jjigae is complete, there is a promotion! 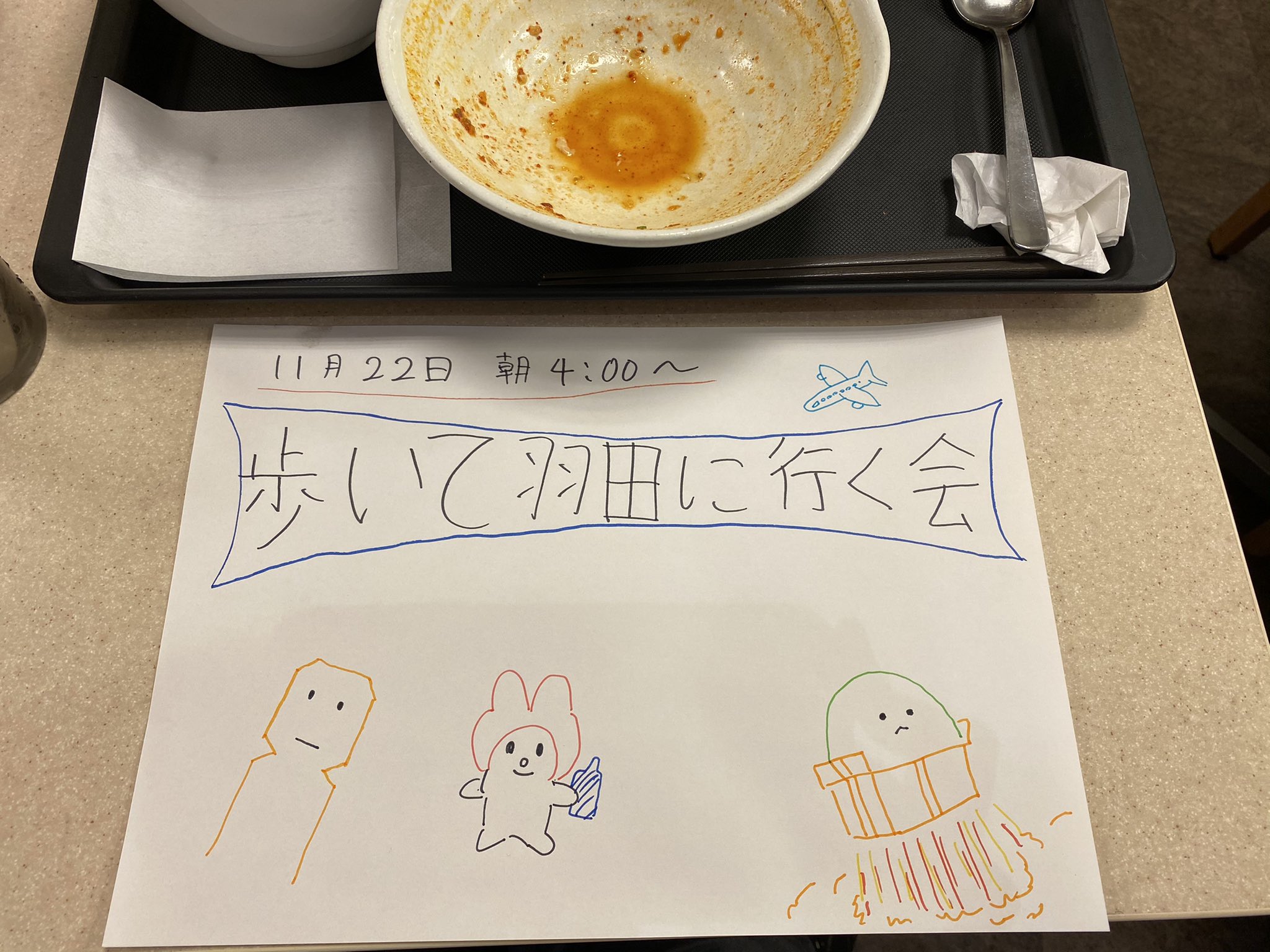 It doesn't matter, but dregs of uec19 said,

This is also unimportant, but one of the most badass tweeters at UEC20, Rupisia, even though I showed her the meeting place on the map, she was 20 minutes late because she got really lost and ended up in a mysterious park. (?)

Nerds gathered at the meeting place. It was really scary because there were UEC20. Why are you coming?

A few of them were late, so I said,

Yup! I'm leaving all the late nerds behind!

I arrived at Tama Suidobashi. It looked quite far, but this is 2.3km. The destination is long.

It seems to be the first train time.

By the way, there was a path around the pond(?) along the river that looked interesting (probably Kawasaki Mizube no Gakkou), but I decided against it because the tall grass was growing so thick. It was still dark and I didn't want to go into the bushes where I couldn't see my feet. ...... Rupi...something said "LETS GOOOO❗️" and shoved her legs zubbed. I told you so....

A little off the Tama River and follow Nikaryō Waterway. Detour #1. I feel that the water is clean.

Because we were playing across the stepping stones, UEC20 gave us a cold stare. That's enough!

It was too far away to be a stepping stone, and it was stupid. It would fall and I doubt they were "stepping stones" in the first place.

By the way, it seems that the word "fall" was a forbidden phrase because there was an otaku who was in danger of earning credits on that day. I was messing up.

There was a rare type of bridge that passed under the railroad track insanely. Since the ceiling is a net, it seems that you can see the back of the train when the train passes. I wanted to see it, but I gave up because the train would come 10 minutes later.

Huh? You may have thought. Yes, I played too much in the canal and only progressed about 2 km in 90 minutes. Hmmm, but I had fun with the stepping stones, so what the heck!

As the sun rises, I get a little impatient. UEC20 got angry at us, the unhurried 19 trio...

While squeezing my ass As I proceeded, I finally arrived at the detour. Kuji Cylindrical diversion.

Circular diversion is a device that "passes water underground, pumps it up, and drains the spring water in several directions." I've heard that it is used to distribute water to multiple canals. Moreover, because it uses the Siphon Principle, there is no need for power or mysterious device-circling slaves . Science is amazing

Can I arrive at the place I'm looking for and go home?

There was a liquor vending machine. I'm an adult so I'll buy it! I thought but I couldn't buy it because I don't have a driver's license. Tohoho

I came to a mysterious area with only a bank. The river is not flowing. Huh?

It seems that it was made for water control in the Edo period called "Kuji Kasumi Tsutsumi". If you are interested, please check it out. Here etc.

By the way, "shit" is also a forbidden phrase. I said it about once every 10 seconds, so it was banned. But no one was protecting it. what do you mean?

In facilities such as office buildings and hotels, unlike ordinary roadside stores, customers with a specific lifestyle are the main customers. Therefore, in addition to providing products that are adapted to the daily life scene in the facility, we also provide products and services that allow customers who visit the store repeatedly to feel the joy of daily life more than ordinary roadside stores. need to do it.

I was distracted by the exclamation mark and forgot what I was doing. I came to look for a toilet.

When I went up, I found a map. What! The correct answer for the place where the baby room is located was back . Bad design award. Write in Japanese!

However, although the baby room was on the lower floor, the toilet was on the upper floor. As a result, the answer is correct! What are you talking about?

I received a mysterious coffee insert from an otaku who didn't come on foot here. Thank you for being cold! Thank you very much!

But I ordered iced coffee and drank it outside. why?

Also, at a convenience store in the business district of a fashionable town, a redneck Bakao Taku

I'm sorry that it took a lot of time to do something like that. What's more, Naughty Otaku was stuffed with cinnamon sugar, nut sugar, vanilla sugar, and other fashionable things. help me.

On the other hand, the team on the other side of the division was at Tamagawadai Park 500m away. It's surprisingly close.

I came to Futakotamagawa Park.

There was Starbucks in the park. Seeing this kind of thing makes me feel like I'm in the city. Cheeky

I returned to the route along the Tama River.

Around this time, I play baseball insanely along the Tama River. No matter where you look, baseball was a baseball boy, and the group running from the other side was also a baseball boy. Did you come from Haneda?

Rupishia-san ran with a baseball boy, but ...

I came to Tamagawadai Park. Beyond this, it was Tamagawa station, so we talked about eating something.

So I sadly decided to go to Lawson. I'm glad there was Lawson. 2

At the aquatic botanical garden, there was a person who said something strange like "Why don't you close your eyes?"

You'll arrive in the morning! Although I said w, I became suspicious of it. Because it is a turning point. Please reflect on the stupid (Google Maps) that said it was a 5-hour walk.

Yes, I knew that I couldn't arrive in the morning! However, it is proceeding smoothly along the Tama River. However, it has become stricter. Physical condition. Detours I was able to come smoothly without making a big detour, which is unusual for a nerd. I mean, there are only slides along the river that make detours.

When I returned to the river after stopping at FamilyMart to buy a drink, the nerdy enemy here Are appeared.

For a short while, the joy of ** was reappearing.

My legs and legs are starting to hurt.

Where are you here

Looking at the straight course, I started to get really tired. What's really this, is it stupid? When I was too tired to walk on the road, a foreigner shouted and passed by, but my head was stupid, so "I'm a taunting robot!" I laughed and walked. I did. It's a hindrance to spread and walk, so let's stop

Speaking of which, at the height of this anger 3, I received this letter from a non-participating nerd on foot.

That's why I passed through a mysterious section called Tama River 50km. The nerd said "Is there a guy who walks 50km? Isn't he stupid?", but I think it's usually a bicycle. You walked too much and said something strange. I thought, but the full marathon is 42.195km, so it wouldn't be strange for some people to run 50km. Bakemon too

I was so tired that I took a break for a while, and when I finished the break and proceeded a little, there was ...

The mysterious observatory stood out. The pain in the nerd's leg lost his curiosity, and he decided to climb the stairs while squeezing.

What is this even though it's not such a big view? Looking behind me, I saw a tennis court. I see……

I felt it was a long time from the previous place, but it seems that it came at a surprisingly normal pace. Worked hard. Everyone is silent from here. Atari-san is a hero hero, I'm a decent hero hero, Rupia-san is a little further in front, and Kyu-san is in front of me, isn't it?

I also made a nerdy dash to lose and caught up with Kyu-san. You can only use your physical strength to play around with it ... By the way, I lied, "I can afford it at all!" The liar is the beginning of Chikuwabu.

So I arrived at the island where Haneda Airport is located. It's not the goal because the terminal is the destination. Uhhhhhhhhhhhh! !! !! !! !! !! !!

It seems to be a international terminal. The characters are cool. How nice! I'm tired, so let's sit down! So I was sleeping in a chair even though I wasn't a passenger. Hmmm, is that okay? I thought, but I suffered from a land trip, so I want you to take a rest. However, I have to go to Terminals 1 and 2 **, so I will leave the chair early.

I also went to the top. It was a time, so it was a rattle. It's an international flight.

I came to the airport! I'm glad I enjoyed the feeling. Let's go home! on the train!

For no reason we have to go to Terminals 1 and 2. On foot.

Anger is exploding, it's really painful, You'll fall down like this?

Well, departure progress! The nerd was too sharp, so let's buy ice cream! To the story 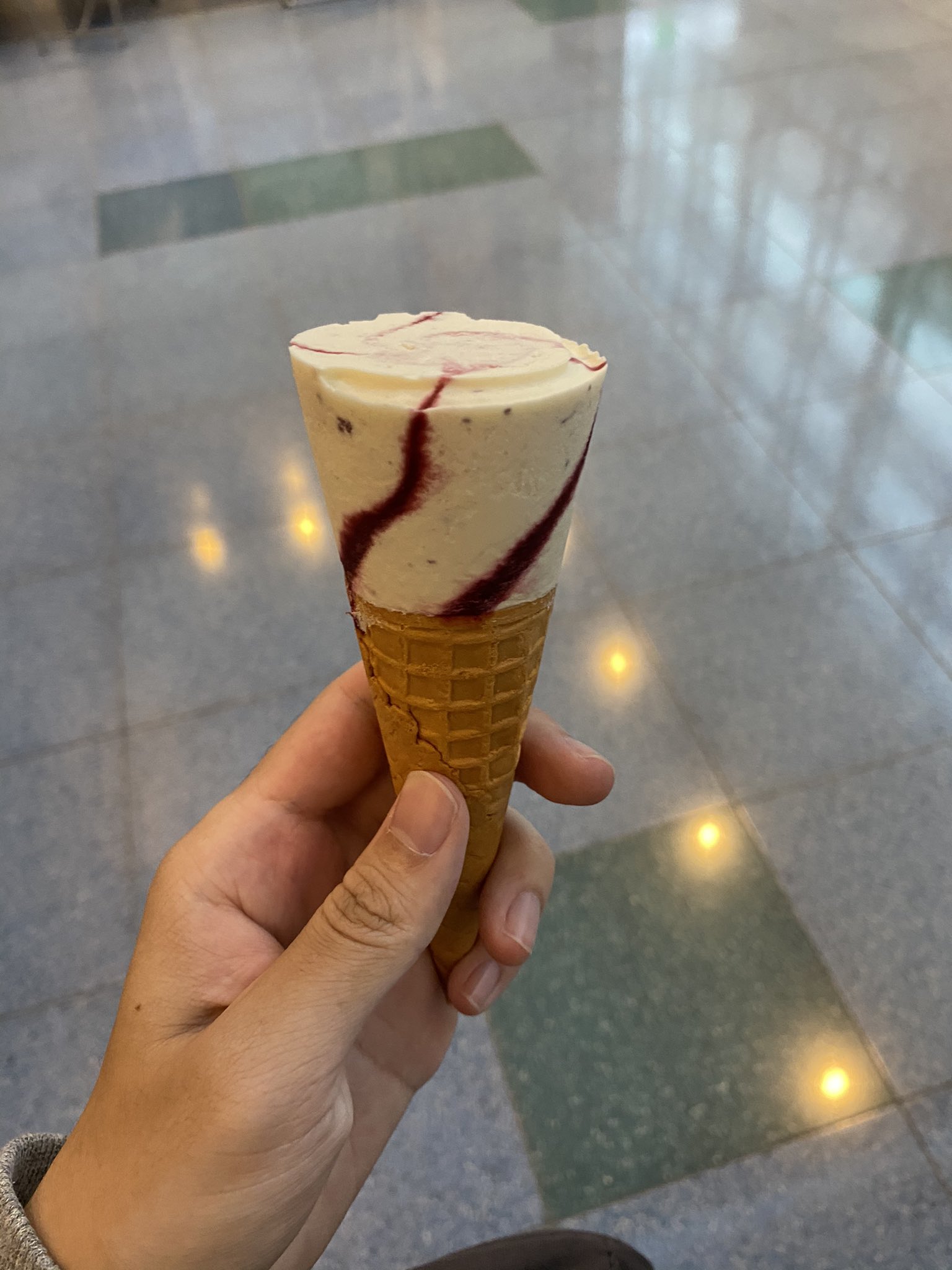 There was a place that seemed to be a shortcut, so when I went there, it was closed. Is it harassment?

But usually I go by train, so I think it means don't walk. I don't know.

3km I was frustrated and bent on such a really long, shit-long, deadly straight road. After walking 2.5km on a long road and a long tunnel, I finally arrived at Terminal 1. What's really going on at this airport?

So I arrived at Terminal 1. I moved to Terminal 2 from here, but I was too tired to sleep in a chair for about 10 minutes. Also, I joined a part of the team over there. Some people seem to have returned. That's right

But it's really strange that there is a guy who is arriving like this over there, thank you very much.

Then, proceed through the underground passage while squeezing the last force and heading for Terminal 2.

What to eat at the airport? also , I'm afraid. Shit ~~~~ But where are you going? I can't think of it, so this may be peaceful. that's right.

Then use the genius Keikyu Airport Line to return. Thank you for your hard work.

was. This is wandering from Chofu, not reflected in the distance in the article spinning around in vain, wandering around the store, inside the airport It is a value including the amount of rampage. Also, it is quite suspicious in the article because it is measured roughly with a distance measurement tool.

So I will never do it again. good bye

I walked from Chofu to Haneda